"You alone can change dieting from being a painful thought, to that of a positive, rewarding one. Just as a sponge absorbs whatever is around it, so does your mind. From a negative attitude to unsuccessful past experiences, each contributes to how you think. And what you think, you become. Create your own mindset. Whether your attitude is positive or negative is up to you; not your friend, family or coach."

Nothing else I can to that!!
Posted by Healthgirl at 8:37 PM 1 comment:

Saw this pic and thought:
1. Hilarious
2. Hot
3. Glad they chose a good cause. 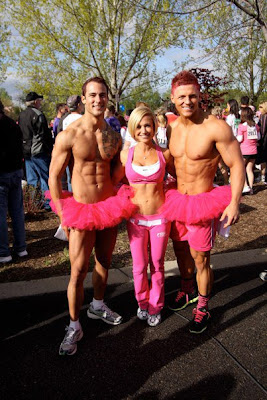 Posted by Healthgirl at 6:45 AM No comments: 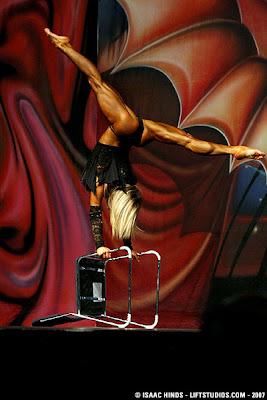 Posted by Healthgirl at 1:14 AM No comments:

I've been on fire this week. Determined and motivated to stop watching my life go by and actually dig down and LIVE it! I've come to terms with how my body currently processes things I put in my mouth. For right now, beans and quinoa are not good protein sources. I hold on to the carbs and store, store, store. I've built some great muscle over the first part of the year but I am not losing the fat. I know I have the ability to build muscle fairly easy so I am turning to more isolated protein and fats to get the fat off me. I am having my scrumptious oatmeal concoctions in the morning and that's working fine. Everything else after is protein, veggies and fat.
Thant being said, a friend posted this video up on facbeook and I thought it was awesome.

1. Trust yourself. Who do you want to be? (not what) Eliminate all distractions to listen to your heart and who YOU want to be. That means turn off the TV, the iPhone, the random chatter and sit still long enough for that voice to become loud. Listen to that voice no matter what others say.
2. Break the rules. Not the law, but the “rules”. Those are the made up beliefs about how things are. Break all the limiting ideas about what is possible. Create a system to break the rules, like training every day, taking classes, learning what it would take to break the limits. Turn your perceived “weaknesses” into advantages.
3. Don’t be afraid to fail. You can’t be paralyzed by fear of failure or you will never push yourself. You keep pushing because you believe in yourself and in your vision and you know that it is the right thing to do, and success will come. Some of his movies were “failures” but he kept on making more. In baseball, a 70% failure rate batting means you are worth MILLIONS a year!
4. Don’t listen to the naysayers. How many times have you heard that you can’t do this and you can’t do that and it’s never been done before? His mother in law started Special Olympics 40 years ago. Everyone said they were handicapped, they can’t do anything, no one will watch it. Thank goodness she didn’t listen to them. They are now in 164 countries! Again, listen to your heart not the outside world.
5. Work your butt off. To the question: "How many sit-ups do you do?"Mohammed Ali answered, "I don’t count my sit-ups. I only start counting when it starts hurting. When I feel pain, that’s when I start counting, because that’s when it really counts."
6. It’s about giving back. Whatever path that you take in your lives, you must always find time to give something back, something back to your community, give something back to your state or to your country.
Posted by Healthgirl at 12:00 PM 1 comment:

So the PMS monster is full swing... well she was anyway. ;)

I woke up feeling cranky for no real reason at all. I just felt grumpy. So I got up drank a bunch of water, all the while wanting some kind of chocolate to soothe my grumpy self. I've been so mindful about my food this week that I immediately recognized something wasn't right. Now it seems obvious that nothing about diving head first into a vat of chocolate-y goodness is healthy or productive in losing weight. Yet, that was my desire. Give me SOMETHING that is chocolate. I drank a bunch of water hoping the craving would subside. Not this time.

Now I am in tune with myself enough to know that if there is something bad to eat in my house it will get eaten. I may resist for awhile, but in a weakened state I will consume. I am not to a place where I don't crave things. I hope that day will come, but I don't expect it for awhile. I had purchased some things to make a "treat" for myself. Thanks to Chocolate-Covered Katie, I found a decently healthy alternative to the evil girl scout cookies Samoas !
I don't call these things cheats. I'm not cheating. Its a planned treat. Something to calm the inner cry baby who has been fed sugar-laden foods for so long. I intend to make healthy alternative meals once a week so that I don't feel deprived. This keeps me on course without feeling deprivation that leads to a binge. Yeah, I said it. BINGE. I can eat healthy all week and blow it all in one night of crap foods- starting with dinner, followed by desert, drinks and after dinner drinks. The way I see it, a healthy flat bread or pita pizza with salad and a little Samoa cup is much better than a delivery pizza, pop or wine and then a whole box of Girl Scout Cookies. I can try to keep those portion sizes down but usually I feel like a deprived fiend by the time I place that kind of order.

On to my victory.. While in California at Deer Park Monastery, I put Mindful Eating into practice more effectively. I was in a place where there was no hurry to get anywhere and I was surrounded by others who were eating mindfully, too. I also had to let go of any neurosis I had about what to eat. I ate what the nuns prepared. There were choices at each meal, but it was vegan and my fallbacks- protein powder and egg whites weren't on the menu. I enjoyed oatmeal with a variety of "fixins" each morning for breakfast. And it was divine! I let go of my paranoia that I would get huge from carbs and fats. I was thankful for the meal and I enjoyed each and every bite.
Today I called upon those experiences and my commitment to following a healthy eating plan. I made up my oatmeal (without having done a workout prior- *gasp*) and added all sorts of scrumptious ingredients to soothe the PMS Monster. Craisins, shredded coconut, sunflower seeds, slivered almonds, 14 chocolate chips, and one packet of Justin's Almond Butter. Each thing was in a small portion and my calories are still in line. This was the perfect solution to the clamoring within. I ate slowly, enjoyed each bite, and I am satisfied.
They key lesson I learned about eating while I was  in California was that slow and mindful eating led to much more satisfaction. I honestly did not feel like I lacked for food or felt any cravings. It was such a beautiful thing to not be so focused on food and my feelings. I was able to be reflective rather than longing for something or battling some craving or planning and stressing over meals and timing. I let go and in that letting go I arrived at a deeper level of acceptance and peace. I feel much more ABLE. I am able to approach my eating in a different way. As I became aware today, the cravings didn't magically disappear (darn!) but I have tools and skills to handle them in a healthier way. I could have had plain oatmeal with egg whites and still had cravings to battle the rest of the day. Or worse, I could have had the brownies my mom made (much to my dismay).  Instead, I let go of the rules a bit to find an alternative that was healthier mentally and physically.
I am victorious! And I am at peace. I have no guilt eating carbs without working out first. It would have been wiser perhaps from a micro point of view, but in the overall picture- I did the right thing and I feel so good about that.
For anyone that struggles with eating issues, it is a hard thing to get handle on. Mindful eating in a fast paced, rat race world is hard! But I promise that with some attention and dedication to trying it, the results will come. I'm not saying anyone will lose x amount of weight, but I can say that the satisfaction that is felt and the reduced stress over food  will make a HUGE difference in the long term. I have struggled with meal compliance for .... ever? This week was so much easier than it has EVER been. Really and truly.

Peace and Balance My Friends!
Posted by Healthgirl at 11:22 AM 3 comments:

So I had the pleasure of cheering Stef on at her first Figure Competition and taking some photos for her transformation challenge and some fun fitness stuff. I think she's a fitness model in the making. ;)  Gorgeous smile!

Congrats on a job well done Stef! Your hard work and determination paid off!
Posted by Healthgirl at 3:52 PM 1 comment:

Healthgirl
United States
I'm a woman on my way to a healthier life. Along this journey I have learned much and will continue being a diligent student. I love learning. I love working out. I also love photography. I'm on the path to making my life more fulfilling.

"Be miserable. Or motivate yourself. Whatever has to be done, it's always your choice."
--Wayne Dyer

"You have a very powerful mind that can make anything happen as long as you keep yourself centered."
--Wayne Dyer

“Our thoughts create our reality -- where we put our focus is the direction we tend to go.”
--Peter McWilliams

"If you have a strong enough why, you can bear almost any how.”-- Frederick Nietzsche

"There is a difference between interest and commitment. When you're interested in doing something, you do it only when it is convenient: when you're committed to something, you accept no excuses, only results."
(Excerpt The Success Principle)

The ability to stay committed to a mission is what makes you a winner. -- Pauline Nordin

"To reach high levels of physical and personal success you must approach your training, and your entire life, as an endeavor in constant growth. The ultimate truth is, you are either moving forward or moving backward; growing or dying. There’s no such thing as comfortably maintaining." -- Tom Venuto